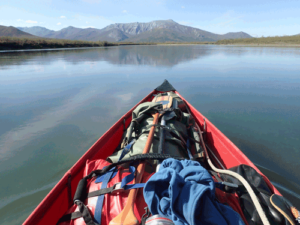 Expedition canoe trips are our favorite way to enjoy Alaska in the summer. We have traveled thousands of miles in canoes throughout Interior and Arctic Alaska. We began teaching canoeing as volunteers in 2012 and discovered how much fun it is to share our passion with others. In 2014, we decided to take canoe instructor certification classes through the American Canoe Association in order to begin our canoe instruction business. We are not a whitewater canoe school, a guide service or an outfitter. We are in the business of canoe instruction. Our goal is to help you safely get outside and enjoy Alaska’s natural beauty by canoe.

Don became an Eagle Scout at age fourteen and in many ways that influenced his education, vocation, and avocations ever since. Don arrived in Alaska in October of 1976, with his canoe on top of his car but had to wait until spring to find enough water to canoe. “What will I do in the winter?” Atlanta-born Don wondered. “Cross country skiing,” his Alaskan friends answered. For the past forty years these two avocations compliment Alaska’s two dominate seasons, long winters, and intense summers.

Tracie grew up camping with her family. She has always loved lakes and the ocean, but it was not until 1994 when she came to Alaska for the summer that she got bit by the canoeing bug. Since that time, she has worked to improve her paddling and camp cooking skills. Nothing is better than being out on a river with lots of time, great friends and plenty of food.